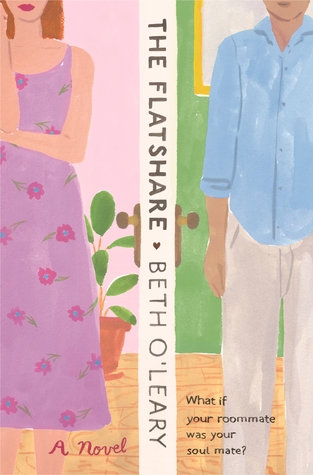 A realistic take on emotional trauma.

The Flatshare is the kind of book that, while overall fantastic, will mean much more to those who have lived through the topics discussed. If you haven’t been a victim of emotional abuse or gaslighting, you will likely find this to be a fantastic literary romance that touches on very real topics. If you are someone who has lived through that sort of trauma, this book with speak to you in unbelievable ways.

When I first picked this title up, I did so as it has been widely recommended and well reviewed in the library world. People I respect were discussing how great it was, so I felt compelled to pick it up. Once I reached about halfway through the book, I realized what a character arc we were going to read, and it honestly was refreshing.

Tiffy has recently broken up with her on/off boyfriend, who was likely cheating on her among a million other infractions. Due to her income and time-frame, the only housing she can find and afford is to share an apartment (and bed) with Leon, a night nurse at a hospice. The two have a deal where she gets the apartment from 6pm until she leaves for work in the morning, whereas he gets the apartment during the day. As the book goes on we learn more about Leon and Tiffy as well as them finally interacting in person rather through their usual form of communication; post it notes.

I won’t spoil the highs and lows of their relationship, but Tiffy is faced with a lot of very real, very valid emotional situations due to the past abuse of her ex. I related heavily to her experience, especially the second guessing of her own mind and her downplaying her issues due to his mind fuckery. Her ex plays a big role in the latter half of this book, but to me it never flowed into melodramatic territory. It was a very real fear and threat to her, and her character arc from brokenhearted woman to one with self-realization was a joy to watch.

The other characters in his book are also fantastic, from Leon, the roommate/love interest to Tiffy’s circle of friends. We all need a group of friends like the ones she has, and I thought they were a spectacular addition to the book.

I was blown away by how much I enjoyed this, and I hope you are as well. It’s a fantastic romance, but also a great explanation of what living through emotional abuse is like for many women. If I had to give this a rating, it’d be 4.5 stars. To learn this is the author’s first novel is incredible. I look forward to what comes next from O’Leary!

Read Alikes:
One Day in December by Josie Silver
Josh and Hazel’s Guide to Not Dating by Christina Lauren
Attachments by Rainbow Rowell
The Rosie Project by Graeme Simsion