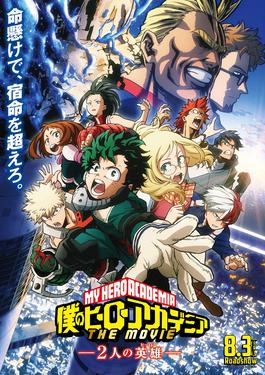 God I love these kids.

If you’re going to make a spin-off movie of a popular series, make it just like this.

We all know I am a die-hard My Hero Academia fan. I finally saw this movie this past week, even though it came out a few months ago, because back then I hadn’t fully committed to the MHA train. How I wish I could have seen this in theaters.

Basically, this is exactly what you want for a spin off movie. It has it’s own separate plot from the anime, yet pulls in all the characters we know and love so it doesn’t feel too far out of the wheelhouse. It gives us a different threat to deal with while planting seeds that lead back to situations taking place currently within the manga run. Genius. There’s a flimsy excuse to get all our favorite characters from Japan to the United States (seriously do any of these kids have parents?) and it’s just generally fun. It’s a fun movie.

The premise is this. All Might is losing his powers and thus travels to I-Island, a place primarily used for research and development in regards to heroes. He takes Midoriya along with him and while there meets up with famous scientist and old friend David Shield and his daughter, Melissa. While Melissa shows Midoriya around the island, David runs tests on All Might to discover his quirk is nearly depleted. David has no idea All Might has passed his quirk onto Midoriya, and thus he begins to try and find a cure so the world doesn’t lose it’s great peace keeper.

Midoriya and Melissa run into basically half of Class 1A from UA High while exploring the island, and they all agree to meet up for the formal party that evening. Once they get there however, a gang of villains take control of the tower, incapacitate the heroes there, including All Might, and threaten the lives of civilians. The kids team up to work their way to the top of the tower in order to let Melissa override the security system and it’s so fun to watch. Everyone breaks off into groups and I love seeing how the kids can use their powers in different situations. Melissa reveals she has no quirk, but she’s smart and understand computers and costume design, and uses that to fight off the villains.

The ending has a twist I won’t give away but hey, it’s a fun movie for everyone. There’s good lessons on what it means to be a hero and if quirks are necessary, and also about believing in your friends and the good in other people. All that fun My Hero Academia stuff.

Go watch it. If you like My Hero Academia, you will love this.