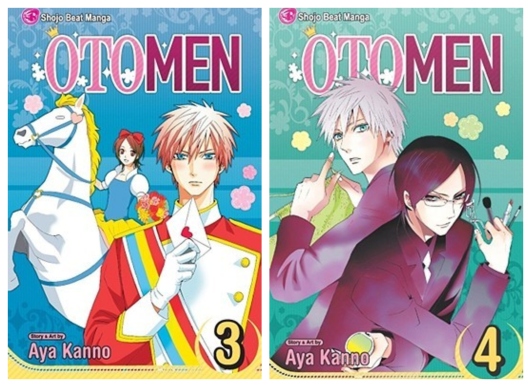 The most ridiculous and fluffy palette cleanser series!

In the first two volumes of Otomen, we learned about Asuka, who seems like a stereotypical man’s man. But Asuka has a secret: he’s an Otomen. He loves “girly” things like cooking, sewing and reading romances, but he hides that from the world because his father left his mother to live authentically as a woman and his mother resents anything that isn’t stereotypical masculinity.

As he is struggling to find out his true self, he meets Ryo and falls for her, only Ryo is the opposite of a girly girl! She knows martial arts and can’t bake to save her life because she’s been raised by a single father. The third member of their group is Juta, a secret manga author who is using Ryo and Asuka as his basis for his hugely popular series, though they’re unaware of this.

In Volume 3, the gang goes on loads of fun adventures including Asuka volunteering to help Ryo at a daycare center, an amusement park date in which Asuka stops a man from potential suicide and the secret backstory of Juta and his family. We also get some new characters joining the fold in Tonomine, Asuka’s main martial art rival and….another otomen?! Scandalous!

In Volume 4, Ryo’s father approaches Asuka and asks for his help in learning what women like, all to secretly impress Ryo for her birthday. Her dad is the super tough guy police officer, so him asking Asuka for help is a big step in showing how he is slowly coming around to accepting him. Asuka also discovers a secret flower garden and Kitora Kurokawa, a new friend who obsessed with flowers. Turns out there’s more Otomen than anyone thought! When the gang goes to the beach to help Yamato’s uncle with his beach resturant, loads of craziness ensues and man is it delightful.

Otomen is like a delicious angel food cake. It doesn’t have a whole lot of deep substance but man is it enjoyable as you’re experiencing it. I love this series. It’s fun, it’s cute, it’s silly and ridiculous and it reminds me a bit of Ouran High School Hosts Club, which is a favorite of mine. Everything about Otomen is lighthearted and fluffy I will never stop reading it. It’s a perfect palette cleanser after reading something dark too.